Avalanches: Had some fairly good views of lots of terrain and didn’t note any new avalanches. Still lots of old avalanches from last month waiting to get buried.

Weather: Clouds cleared a bit throughout the day. Periods of light snowfall during the day put down some nice goose feathers. Didn’t see much for drifting during periods of visibility, but also didn’t spend a lot of time in exposed terrain.

Snowpack: Touched all the aspects, but primarily traveled on northerly facing slopes below treeline where the best riding was. At 11,000ft and on shaded slopes, storm totals were currently settled to about 6″. On sunny slopes or at lower elevations storm totals were 1 to 4″ on average. So Kebler clearly got a bit more snow out of this storm. We didn’t encounter any new avalanche problems.

In the late afternoon, I spent a little time at an 11,300ft near treeline point. Here I found isolated drifts up to 10″. Hunting around for a more notable snowpack ob didn’t produce in that area. The new snow was getting thicker and/or baking in on East, South, SW at this location. 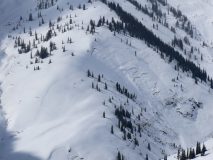 The typical Upper Slate River glide cracks still doing their thing despite the past avalanche activity in that terrain.