Avalanches: Natural avalanche activity spiked mid-day during a period of heavy snowfall. Soft slabs of new snow failing on the very weak, faceted, old snow. Many D1’s near treeline and a few D1’s below treeline. About five D2’s and, one D2.5 near treeline. For the most part, these were very soft slabs that just slumped into the weak facets below, started moving, then stopped 50 to 100ft downhill. Others initiated the same way, but continued to gain momentum and entrain the full snowpack.

Not all these slabs propagated widely, but there were some standouts. Runaway Ski propagated across most of its start zone and continued all the way across Thanksgiving. Runaway Ski mostly just slumped and was D1 in size. While Thanksgiving ran nearly wall to wall and hit the bench. Even the skiers left shoulder in Runaway pulled 90% of that terrain feature.

Yogy’s had a soft slab propagate across 80% of its start zone. The skier’s right side mostly slummed and continued to run about 1/2 way to the bench as a D1.5. While the skier’s left side quickly entrained the full snowpack, and was estimated to be D2 in size, I couldn’t see how far the skier’s left side ran given poor vis.

The crown lines on these avalanches were already getting hard to see from a distance given their soft slumpy character, and the 15-30cm crowns were filling back in.

Weather: Fairly consistent snowfall from the time I headed out at 9:30am until 2:30pm. Mostly S1 to S2 with a period mid-day near S5. Mostly light winds at ridgeline, drifting snow during brief periods of moderate gusts.

Snowpack: The avalanche danger increased quickly sometime around 11am to 1pm. During the morning, test slopes were collapsing and shooting cracks up to about 15ft. As the day progressed that activity increased and many small avalanches were remotely triggered up to a couple hundred feet away. For the remote triggers that were further away I think it was an interesting chain of events with one small slab beginning to move, then sympathetically triggering another further away, and another… All the avalanche activity was silent and I never felt a collapse.

The entire snowpack was mostly unsupportive to skis making for scary downhill travel with all the hidden ground hazards. HS generally averaged 40 to 50cm’s down low and 80 to 90cm’s closer to 11,000ft. 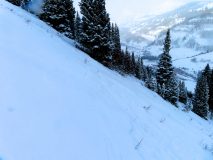 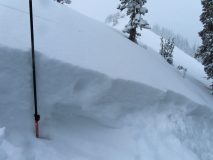 Yogy’s skiers left side. Just below the shatter you can see where the slab quickly gouged into the facets as it ran down hill. 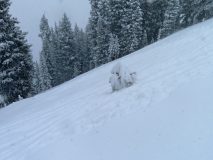 Runaway Ski with cracks and general slump near the ridge. The resulting avalanche was on the steeper slopes below. 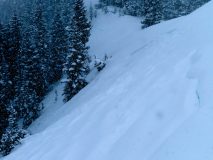 Part of the Thanksgiving Crown. Already getting hard to see. Again, slump, with the avalanche gaining momentum slightly further downhill. 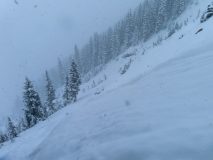 Mid-track in Thanksgiving. The avalanche ran through everything in that direction and most of the slope behind the photo. 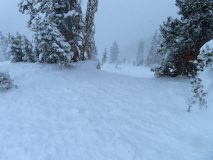