Avalanches: No new avalanche activity observed beyond the carnage from the past several days. Toured quite a bit outside of the main skin track and didn’t observe any cracking or collapses in open areas.
Weather: Clear w/ strong temperature inversion. -2F at TH and ~25 at 11K @ 1pm. Calm.
Snowpack: Large settlement has occurred on S & SE aspect since Xmas storm (see pic). ~20 – 40cm based on aspect and elevation. Storm slab has consolidated (now 4F to 1F) and seemed to increase in strength as the temps and solar continue to influence the snow during my tour. Surface snow was even gaining a bit of moisture during my descent below ~10500 at select aspects. Ski pen of 10 – 20 cm, Boot pen of ~60 cm.

Slab sits above crusts, depth hoar, or directly on the ground based on aspect and elevation. Where it is not resting on the ground the interface is scary. Compression test produced Q1 sudden collapses (CT3 & CT13) at depth hoar layer. The column would also produce a sudden planar fracture above the melt freeze crust as it collapsed in the pit.

General feeling was the slab is gaining strength and finding a very delicate balance with underlying weak layers but the potential is growing. 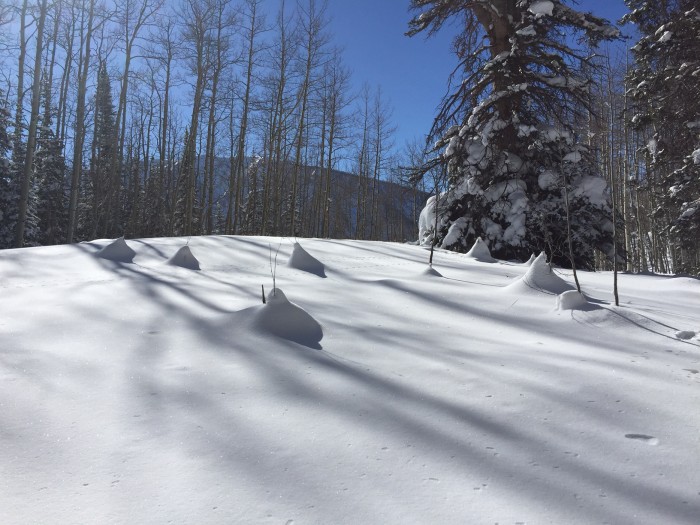