Zone: Northwest Mountains
Location: From Splains Gulch ascended the West face to the summit of Axtell. Skied South facing bowl before traveling back up S/SW ridge where we then skied the West face of Axtell back down to sleds
Aspect: North East, East, South-West, West
Elevation: 10,100ft – 12,500ft

Weather: Broken clouds throughout the day and light winds from the NE. Several short periods of very light snowfall accumulating only trace amounts near and above treeline.

The snowpack is still showing clear signs of instability on many aspects. However, collapsing and shooting cracks are only happening on specific terrain features and have started to become more stubborn.  Slabs are slowly faceting away but there are still many areas that hold a dangerous persistent slab structure.

While ascending a westerly aspect below treeline, we felt periodic collapsing in open meadows where we found soft slabs resting on top of depth hoar (12/10 interface). These collapses were almost always initiated by the third skier. HS on west aspects is shallow near and below treeline averaging about 75cm.

Near treeline on a SW aspect produced collapsing as well. One snowpit at this elevation/ aspect showed a 4F slab resting on top of Fist hard weak faceted snow. An Extended Column Test produced at ECTN21 at this location.

Moving around the compass to NE aspects we continued to experience several occasions of collapsing near and above treeline. Recent northerly winds did a number on start zones of the NE facing bowls of Axtell. These winds have created thin snow cover just below ridgetops that will surely weaken and become a problem at our next significant loading event.

We spent little time on east aspects, but experienced the most exciting results in these areas. A large collapse was observed with shooting cracks that ran about 30ft on a small East facing convexity at 10,000′. A snowpit dug adjacent to the collapse yielded our only propagating results of the day (ECTP 14). These failures were initiated on a thin MF crust sitting on top of the depth hoar (12/10 interface).

Continuing to a Southerly aspect, the skiing was surprisingly great with the exception of areas with a stiff sun crust on steeper slopes. Lower angled sunny slopes continued to ski great.

Bottomline: Many suspect slopes are weakening as slabs are faceting out. Obvious signs of instability are becoming rarer although they are still present.  W-N-E facing slopes below treeline slopes continue to maintain a persistent slab structure, while East seems to be the most concerning.

Shooting cracks on an East Facing slope at 10,100ft 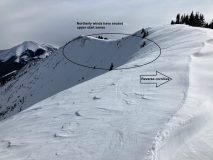 Northerly winds have scoured out many alpine start zones on Axtell. While persistent slab structure is probably rare right now, it also means that the snowpack is shallow and faceting