Intentionally triggered a couple small Dry Loose avalanches on north and east slopes near and below treeline. Loose dry avalanches did not fan out and spread, and entrained little mass, just enough to knock you over.

Weather: Cool day with light winds and some mellow gusts. Did not observe any significant transport of the couple inches of new from the previous day.

Snowpack: A weak and shallow mess. Snowpack ranged from 30 to 60 cm through this terrain. Areas less than about 45cm had little to no support to skis. Areas with 50cm or more still have snow at 4 finger hardness which provided a meager amount of support to skis. On all slopes traveled with open view to the sky there was buried, standing surface hoar, 6 – 10mm in size, underneath the few inches of new snow from the day previous.

East facing slopes were 1 -1.5mm facets that were fist hard with a faceting/decomposing crust in the middle. Small loose dry avalanches were easily initiated but were not quite able to gouge through the crust in the middle of the snowpack. Weakest snow observed was on east slopes just below the surface, 1.5mm solid facets.

Northerly slopes were well faceted, but generally a bit smaller grain size than east, ~1mm. We were able to easily initiated small Loose dry avalanches, but they did not gouge to the ground in most places.

Shaded near and below treeline terrain in this area is not functional for recreating. Depth of snow cover dictated snowpack support not elevation. There was a clear small Loose Dry avalanche problem, but the biggest threat to safety is attempting to ride through this shallow mess. 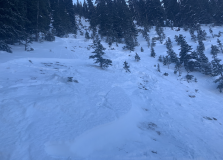 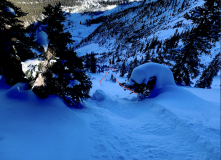 A small, intentionally triggered Loose Dry avalanche on a northeast slope near treeline.

Area of northerly terrain with 55cm of snow holding on to 4finger snow and slight support to skis. 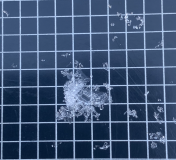 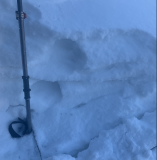 East facing slope with very weak snow and a decomposing crust in the middle. 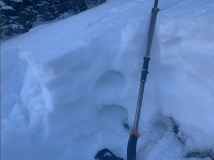 Northerly slope with 40cm of weak snow and zero support to skis.