Avalanches: It’s a smorgasbord of natural avalanches out there. The oldest ones are from Friday 12/11, and the most recent ones are from the last 12 hours. The most recent were all wind-related from the increased overnight winds. Avalanche observations from the last 12 hours above treeline: West on Mt Baldy had 2 D2 and 1 D1.5. There was a small dribbler on a Southerly Aspect of Gothic. Red Coon Bowl had a fresh D2 this morning on an East aspect. NE Purple Palace NTL has a suspect D1.5 the could have fit in the last 12 hours too. All these slabs ran on the old faceted snow near the ground. Some may have started on an interface as a windslab, then gouged, but I couldn’t tell from a distance.

Remote triggered 1 D1, from a few hundred feet away, above treeline, east aspect.

Of other particular note. The SW to W slopes of baldy on the way up to P-Divide had a fairly good cycle last weekend. Many of those paths ran, piling on the road and continuing to run below. About 5 R1D2’s.

Weather: Headed out in the afternoon. The sky had cleared to partly cloudy for the few hours I was out. Winds also appeared to decrease and were generally light with moderate gusts. Most of the snow appeared to have already been transported at upper elevations for the recent wind direction and speeds, however, there were still a few snow plumes out there at times.

Snowpack: Just having fun on a personal day and noting the continued obvious signs of instability. Plenty of collapses and shooting cracks while traveling on East and West aspects. All the steeper slopes I got close to were fairly small in size, and well supported. So they simply cracked without much downhill movement. I suspect that some of the wind-board from last weekend, which is now buried, is collapsing into the softer snow below. Also, some of the fresh wind-loaded features are also cracking on non-persistent grains closer to the snow surface. However there are still slopes cracking hundreds of feet away, so those must be collapsing on the November Facets. The average snow depth in the area was about a meter. 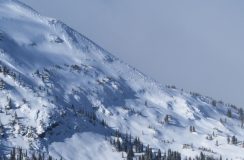 Large Avalanche on a cross-loaded easterly slope by Galena Lake. Hard to say timing, greater than 12hr and less than 36hr maybe. 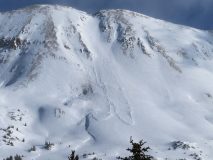 Couple of slabs on west facing terrain of Mt Baldy. Noticed 3 in total that had released in the last 12hr. 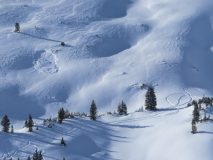 Not surprising small remote trigger on East facing terrain at 11,500. Most of that terrain just cracked as the steep bits of the slopes where to small to move with the current avalanche character. 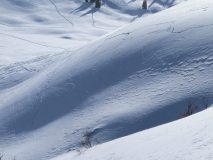 Shooting cracks on easterly facing terrain at 11,200ft. These were triggered by traveling in the valley below. 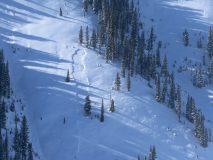 There has been lots of avalanche activity in the Purple Palace area. This was the most recent looking slab. NE 10,800ft. Maybe it released in the last 12hr. or it released greater than 12 but less than 36hr. 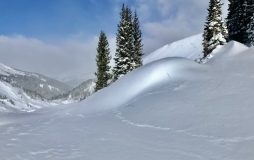 I thought this was a funny looking crack. Hope you do too.