Snowpack: We found good stability on various aspects. On the southern half of the compass, the snow surface was moist or wet from warm temps, often isothermal through the whole snowpack. Expect a crust of varying thickness going into the weekend. Northerly aspects hold dry snow, a mix of softer sastrugi and wind-packed rounds on the surface. No notable persistent weak layers on the surface at the moment thanks to abusive winds and sun, and a generally a homogenous 4-finger snowpack from surface to ground on all but due north aspects. On a NNE aspect, we found the 11/6 facet layer lurking below 70 cm of slab, but it was discontinuous due to talus on the ground. It did not produce concerning pit results or signs of instabilities. We skied steep terrain on both north and east aspects with no instabilities. 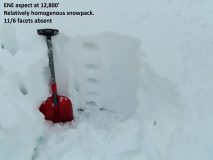 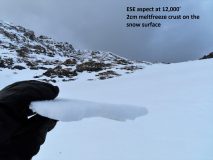 Melt-freeze crusts forming on the southern half of the compass thanks to unusually warm weather. 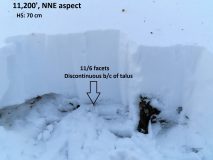 11/6 facets exist on northerly aspects but unreactive in tests here. 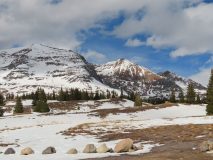 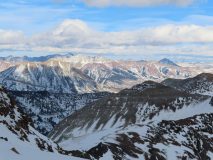