Weather: Broken skies for most of the day. Periods of S-1 snowfall. Light winds.

Snowpack: We went hunting for information on our recently buried March weak layer ahead of this weekends storm. Below tree line, the weak layer is buried by 4” of recent snow. On easterly facing slopes around 9.5k, the interface consisted of a soft 2” thick MF crust resting on top of 1-2 mm facets. Quick shovel shear tests at this site produced easy failure results just below the crust. As the compass tilted north-east the crust became softer and weaker. On due north slopes the interface consisted of 1-2 mm near-surface facets. As we gained elevation we continued trying shovel shear tests that produced failure both above and below the crust. We saw some cracking and got a couple collapses on leeward slopes just below ridgeline where 12″ or more of new snow had drifted over the weak new/old interface.

We also tested the 12/10 interface at a deeper, near tree line site. At this site, the 12/10 interface was buried 110 cms below the surface and consisted of 4F 2-4 mm DH. A pencil hard 110 cm slab is resting on top of this interface at this location.  A PST test resulted in unlikely propagating results (80/110 END down 110 cm). The 12/10 depth hoar was moist and seemed to be showing signs of rounding and sintering. 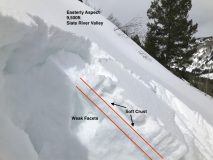 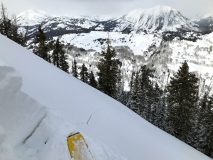