Avalanches: Remotely triggered a large Persistent Slab Avalanche. NE Aspect, 10,450ft. This avalanche failed on, or very near, an up route that is typically used to access the Purple Palace. The crown was estimated to be about 2.5ft thick, propagated a couple hundred feet wide and ran about 800ft to the creek below. SS-ASr-R2-D2-O
Weather: Cold, S-1 snow through the day, overcast and obscured sky. Strong winds picking up in afternoon and transporting snow throughout the tour at all elevations.
Snowpack: The terrain was less ravaged by the previous wind event than expected. Still plenty of wind erosion, and wind-loaded terrain features. Many of the bigger NE facing slopes that we traveled near, had previously avalanched earlier this winter and had about 20cm’s of snow on those old bed surfaces. Other NE facing slopes had wind erosion in their uppermost start zones where we could get close, and not holding the same snowpack that would be expected further down the slope.

Surface hoar was found below treeline in sheltered locations, just beneath the few inches of storm snow, that faced northeast and north, but was quite small, around 3mm.  Not particularly concerning moving into the future for terrain traveled. Did not find it on wind-exposed east slopes below treeline.

Obvious signs of instability have decreased as the upper slab consolidates and grows in size. Still plenty of large collapses and shooting cracks while traveling E to NE facing slopes with slope angles below about 34 degrees. Typically you need to jump to get a result now, versus just walking about. 1F slabs were failing on average 30 to 60cm’s deep on the 12/10 interface. In this area those Near Surface Facets were about 1.5mm in size, F hard, but not overall as week as the same weak layer found closer to Crested Butte.

We traveled a few SE and S facing slope. This had just a couple of inches of new snow on a breakable melt/freeze crust. These were not recently wind-loaded slopes and no current concerns were found.

New snow in the area was probably in the 3 to 4″ range.  Highly variable given all the recent winds. 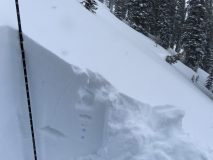 Shooting cracks on a northerly facing slope below treeline. Snow showers hid the cracks by the time the photo was taken. 55cm slab on 12/10 interface. 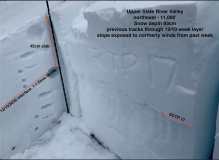 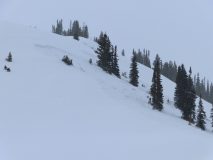 Side angle of triggered avalanche from high in terrain 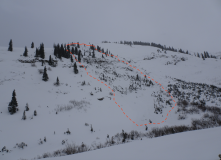 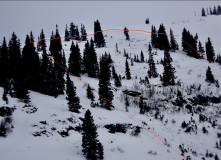 View of remotely triggered avalanche from below 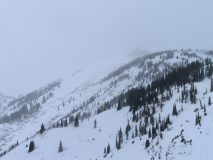 Southwest and West facing terrain. Lots of wind erosion in this terrain, compared to just a day ago. Gullies and cross-loaded features still holding the most snow.