Avalanches: Intentionally trigged several D1 loose avalanches on south-facing near treeline slopes – ran on 4-7cm knife hard melt/freeze crust.
Remotely triggered a slab on an east aspect at 11,200′ from low-angle terrain above – never got vis below the convex roll so uncertain if it propagated further as it ran downhill.
Weather: Overcast skies, moderate northwesterly winds, generally S1 snowfall from 11am – 4pm. Hard to say how much it snowed while out as the storm snow was settling as it accumulated.
Snowpack: Midday measured around 12″ new snow w/ .9″SWE at 10,600′. Observed a midstorm density change in Shovel Tilt Tests. Stomped around on several small shaded test slopes and several steep sunny slopes with almost no cracking other than some ski length cracks in shallow drifts on leeward southerly features. While walking above a steep east-facing slope, looking for a facet/crust combination underneath the new snow, I was able to remotely trigger a convex roll below me. I was not able to get to the crown and never got a good view of the terrain below, but probing above the crown confirmed a soft, collapsible crust beneath the storm snow (similar to obs from Axtel and Snodgrass earlier in the week). I suspect due to wind, I missed the audible collapse of the crust as I skied above. The crown appeared to be slightly drifted where it failed. Snow felt noticeably thicker throughout the day as it settled.

Second-hand reports from Axtel stated 8″ new snow with some loose snow sluffing, and one small triggered slab in an open area below treeline. 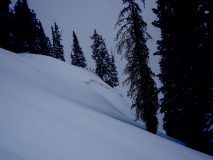 Remote triggered avalanche on an east aspect at 11,200′. Avalanche ran out of site over convex roll. Suspect a soft collapsible crust below the storm snow failed.