Avalanches: Observed loose snow avalanches on sunny slopes near and above treeline, generally coming from warm, rocky terrain features. Up to D1.5 in size. Overall significantly less activity than I expected to find. See photos for examples. Observed one natural run on alpine SE slope at 1:30 pm.
Weather: Clear skies, light winds, and warm temperatures above freezing.
Snowpack: Around 7″ storm snow on top of Kebler Pass and Beckwith Pass.  5″ on lower flanks of Mount Emmons.

I targeted a shaded slope in a shallower snowpack area on the far west end of the forecast area near Horse Ranch Park. I found HS 120cm with dense slab around 75cm thick sitting on old snow from early in season – ECTP 28 x2 result failing in oldest weak snow near ground. 1/19 interface shows clear sign of rounding and no result here. Oldest snow at ground was 3-4mm Depth Hoar – it is starting to round and sinter with around 4finger hardness. Late February weak layer is down 20cm, .5 -1mm facets with ECTN 11 and easy Shovel Tilt Test results.

In the afternoon traveled on southerly-facing slopes checking in on where liquid water was in the snowpack. On several slopes found moist snow from the surface to the ground. Ice columns from percolating meltwater was found nearly all the way to the ground – with around 20cm of moist, 4finger hard snow at the ground without ice columns. Tests produced no result on these slopes even while hammering on the column until my hand hurt. See photo of ice columns. 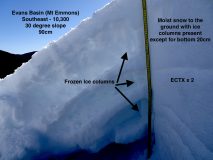 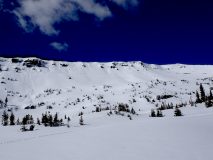 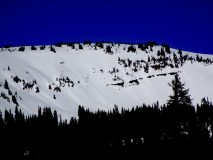 Some very minor roller balls from warming on southeast terrain 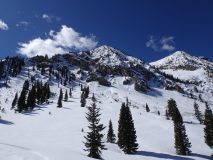 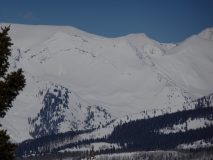