Avalanches: A few small sluffs on the south side of Ruby.

Weather: Mostly cloudy with just enough snow and heat to thicken the new snow. About 3″ of snow had accumulated this since early AM. Calm Wind.

Snowpack: Primarily traveled on easterly slopes between 10,500ft and 11,500ft. In these areas, the 3/10 interface was down 40 to 50 cm’s on average, below mostly F hard snow and a couple of other thin crusts. That interface has been well documented and consisted of two crusts with weak snow between. The thin layer of snow between those crusts is notably soft, 1 mm faceted grains. Those faceted grains did have some soft and slightly rounded edges to them.

Dug a test pit on a 28-degree east aspect at 11,400ft. ECT tests were a bit inconclusive. 2 hard ECT N’s, with an additional loading step in one test that finished the propagation through the weak snow between the crusts. Of other note, the only way to isolate a column of snow without cracking and breaking sections of the crust was with a sharp cord on all sides of the column. A shovel blade was to coarse and broke notable sections of the crust when used to clean snowpit walls.

Snowmobile slammed a whole lot of test slopes with no results. Traveled very near several bigger terrain features with no remote triggered results. Despite the lack of red flags or signs of instability, the snowpack structure still appeared concerning and will take time to earn my trust. 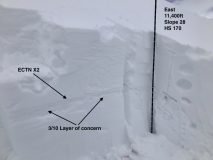 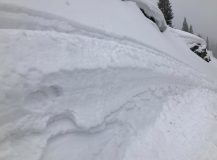 The double-crust revealing itself in tracks 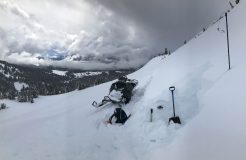 Convective spring weather with a few breaks in the clouds allowing the sun in at times.