Got decent views towards the East side of the Ruby Range into alpine terrain. Numerous D1.5-D2.5 slab avalanches on slopes facing primarily E-NE with a few wrapping around onto SE aspects. Some failed early in the cycle with crowns and paths faint, while other failed later in the storm with increasing northerly winds. 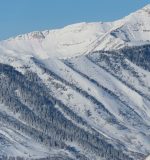 Slightly better lighting on these previously reported slides in Peeler Basin which ran early in the storm.