The week consisted of three separate storms that kept clouds and snow in the air for most of the week. The first storm began on the night of the 19th and continued through the afternoon of the 20th. It brought with it low-density snow and very little wind, preserving and burying the surface hoar that had grown and had been observed on all aspects up to at least 12,000 feet in elevation. The western part of the zone received significantly higher snow totals with 24” of new snow reported in the paradise divide zone on the 20th. Schofield received .7” of SWE and Mt. Crested Butte received .4” of SWE.

On the 21st, the second storm came in lighter than forecasted and resulted in mostly light snow showers across the zone. Schofield received .3” of SWE. A small ridge then formed over the western US on the 22nd allowing for a short break in the storm pattern. The third storm combined Pacific moisture and a strong upper level jet to hit our area ferociously on the 23rd. We experienced extreme southwest winds and intense snow transport, even in town. During the day on the 23rd, Scarp Ridge recorded consistent 60 mph winds and a maximum gust of 111 mph. Schofield received 2” of SWE and Mt. Crested Butte received 1” of SWE.

From the 24th through the end of the week on the 26th, the third storm exiting to our east brought a northwest flow over our area causing light snow, generally broken skies, and cold temperatures.

This week’s snow buried a widespread surface hoar layer on all aspects along with a reactive faceted crust on southerly tilts. In the beginning of the week, the slab above it was too soft and thin for failures to propagate, but as the snow accumulated over the week, the slab grew and the surface hoar layer became very reactive. Numerous natural and skier triggered avalanches were observed failing on the surface hoar, even on low angle slopes, in relatively dense aspen groves, and as remote triggers. The avalanche danger was rated at considerable or high every day of the week other than the first day of the storm, Jan 20th. In places, the surface hoar layer was deceptively touchy: we had several field days where it didn’t produce propagating results in ECTs but was easily triggered on steep terrain. The extreme southwest winds with intense snow transport likely created wind slabs in the alpine, but with continued snow transport and limited alpine views, evidence of them was likely quickly covered up. Over the course of the week, 39 natural and 37 human triggered avalanches were observed, and we had limited views of alpine terrain.

1/26/16 – Skier triggered avalanche on the surface hoar layer in an aspen grove.

1/26/17 – Skier triggered avalanche on the surface hoar layer that pulled out to a 31 degree ridge.

1/24/17 – Natural avalanche on the surface hoar layer on a northeast aspect below tree line.

1/26/17 – Natural avalanche on a southeast aspect near tree line. 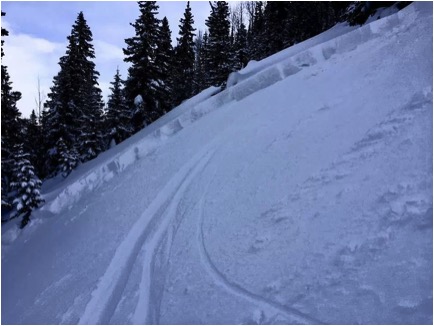 1/26/17 – Skier triggered avalanche on the surface hoar layer on a north aspect below tree line.