Snowpack: Nice to have to use a probe to find the bottom of the snowpack instead of a ski pole or my hand! The 2/3 interface was 70 cm deep and easy to identify by the graupel layer however stability tests revealed small facets a few centimeters below the graupel. There were 2 Surface Hoar layers around the 1/19 interface with a few centimeters of 1F snow in between. This “sandwich” was failing as one in tests. This interface was buried 110 cm deep. Both interfaces popped in short column tests but produced no propagating results in ECTs. We observed no cracking or collapsing. Warm temps and a deeper snowpack have allowed these weak layers to adjust, for now. They will be tested this weekend with another strong storm moving in. 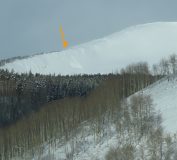 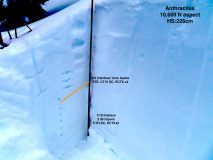 Surface Hoar up to 10 mm was found around the 1/19 interface. 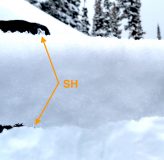 Surface hoar on either side of a thin windboard 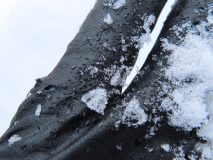 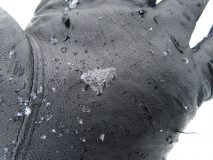