Avalanches: In addition to the many large persistent slab and wet loose snow avalanches already reported, we observed several wet loose on aspects from SE-S-W in the D1-D1.5 size range. All initiating from steep and often rocky areas near and above treeline midday. Of note was a large persistent slab avalanche and several small persistent slabs that ran midday on Schuylkill Ridge, closer to the peak on a near treeline terrain feature that wraps just south of East in aspect. Looks to have initiated from smaller wet loose snow avalanches as temps warmed.

Weather: Cold start with valleys near or below zero. Temps warmed quickly with abundant sunshine and 11K highs climbing above freezing. Strong solar with no wind, even on ridge top. One of the calmest days I can remember.

Snowpack: HST at valley bottom around 11 inches with up to 16 inches around 11K. HS in this area was 130 cm around 10,500′ and 150 cm and greater moving above 11K. No cracking or collapsing was observed in sheltered areas and a snowpit on East at 10,600′ revealed hard propagating results x1 and non-propagating results x1 on the 1/19 interface. The 12/10 interface was about 100 cm deep and showing signs of rounding but still weak at 4F hard(ECTX). Minimal obs from drifted slopes as we avoided those. Recent snow was warming rapidly on aspects from SE-S-W with moist snow on the surface. East aspects had settled into creamy pow with generally dry surfaces. 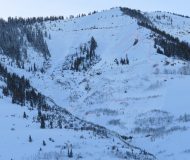 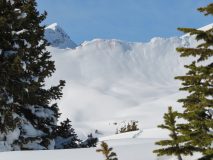 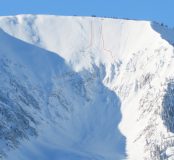 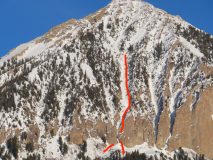 Shallow wet loose on the West face of MT CB. 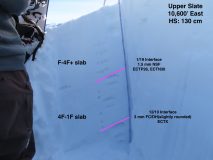 Dude in a hole