An older, persistent slab avalanche on an east facing slope about 200 ft. above the east river valley bottom (see photo).

Weather: Westerly winds and overcast skies made for a cold sled ride in the morning. As the day went on, the clouds cleared and temps increased making for a very comfortable weather day.

Snowpack: We dug below treeline on a NE facing slope a couple hundred feet above the Gothic campground. We found a very stubborn persistent slab problem. At this pit site, the January interface sits 75 cm below the surface, with a large 1F hard slab resting on top. The 12/10 layer, which consists of large grained (6 mm chained) depth hoar, makes up the bottom 35 cms of the pack, and doesn’t seem to be showing any signs of improving. Snowpit tests did not produce any failures even after a couple aggressive swings from the shoulder after proper ECT tests (CTN, ECTX, ECTX). An aggressive shovel shear after our ECT tests did produce failure at the top of the 12/10 depth hoar layer. We did not receive any feedback from the snowpack such as cracking and collapsing while traveling in previously untraveled terrain.

Snowpack below treeline on NE aspect near Gothic Campground 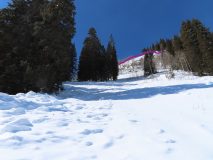 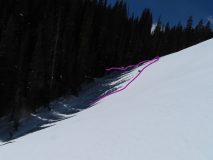 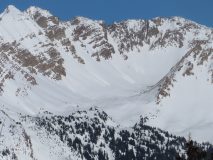