Avalanches: Good visibility in the afternoon lead to only one slab avalanche observation. Fresh small wind slab on Augusta’s SE face at 12,500ft. Below treeline near 10,200ft, we hung out near a very steep NE slope that had a quick shed cycle from the warm temps and a period of sun. These were small in size. Several other small loose snow avalanches were noted from the sun or warm temps.

Weather: Snowfall ramped up after sunrise through the mid-day. Several pulses of heavy snow, interspersed with breaks in the clouds and strong solar. The greatest 24hr snow total measured was on a protected northerly slope at 10,400 feet, HN 25cm. Down in the valley, it was closer to 15cm, but the warm low elevation temps and/or the bursts of sunshine were rapidly settling the new snow at other locations. Hung out at rideline for about an hour and the winds were mostly light. Snow plumes could be seen at times on the high peaks.

Snowpack: The snow really started to add up this morning while the Ruby Range was producing. The low elevation shed cycle in the morning kept us from choosing to travel up a huge terrain trap, but otherwise, those were small loose snow avalanches. We later traveled up a steep below treeline NE slope that had previously avalanched in February and didn’t find any obvious signs of instability. HS above the crown was 195cm, and HS below the crown was 150cm. Gaining a ridgeline around 11,700ft, we found fresh wind drifts about 30 to 40cm’s thick, but they appeared to taper off quickly going into the easterly slope. We couldn’t get any results pushing snow down and the resulting sluffs showed that drifts tapered quickly. We were a little selective where we chose to ski into the above treeline terrain. 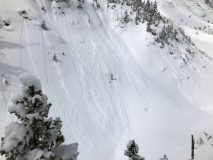 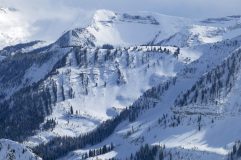 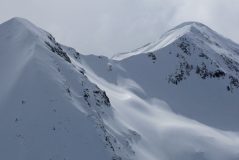 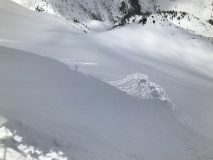