Avalanches: A couple of avalances in steep southeast terrain in Red Lady glades – near treeline type features. Look like storm slabs running on the old crust. Likely failed very early AM of 29th.
One D2 at the very end of Moonscape Ridge by Evans basin – ENE-facing very drifted BTL feature
Weather: Ugly cold at valley bottom in the morning, but comfortable temps near and below treeline in the sun. No snow transport observed on nearby high terrain.
Snowpack: Solar radiation moistened the snow surface on SE, S, and SW slopes up to 11,200′. Made for interesting breaker-crust skiing at 3pm once it started to refreeze. Relentless collapsing on low-angled terrain on the ascent. Lots of collapses on flat ridgeline above steep east-facing slopes but very little cracking and no resulting avalanches, hmmmm. Skied down a short steep east-facing slope without result, but probing sure confirmed the suspect structure below. Dug a couple of test profiles checking on SE facing features to see if the crusts below the new slab is a potential Persistent Slab problem; slab seems not quite cohesive and heavy enough to cause an issue at locations traveled up to 11,200′, BUT a disconcerting double-crust setup exists below the slab. Recent storm snow was around 30 – 35cm thick but still Fist to Fist+ hard and bonding poorly to the crust below (see photo). On collapse ran 100+ feet and shot cracks across a tiny NE-facing slope down to the 12/10 interface; upon inspection Surface Hoar (~5 – 8mm) was found below the recent storm at the likely 12/22 interface. Easily ID this interface with shovel tilt’s tests. 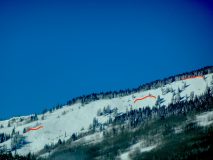 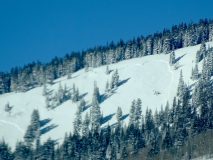 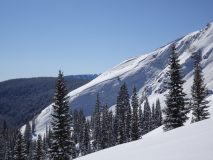 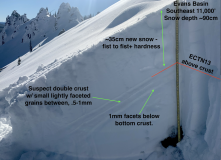 Test profile from southeast slope at 11,000′