Avalanches: While on pavement observed a small, fresh Wind Slab in Red Lady Bowl and a large avalanche above treeline on SE slope of Timbered Hill.
Weather: Partly cloudy to mostly cloudy skies along Ruby Range with a few snowflakes and generally light winds below treeline. Snow transport observed above treeline throughout the day.
Snowpack: Traveled across some sunny slopes between 10k and 11.2K. No signs of instability observed with supportive snowpack to skis and boots. Dug a couple of test profiles on southerly slopes in the area (see photos). Test results suggested stubborn or ‘hard to trigger’ results. Slabs were generally 100cm or greater in thickness above concerning weak layers. One test profile was adjacent to a deep natural avalanche from last weekend with PST 90/125 end result in a previously drifted portion of the slope. The weak layer was slightly moist and rounding at two locations where buried 100cm or deeper. Collapsing deeply buried crusts seems to be possible at a thin spot in the slab, but far from likely through this terrain. Southerly slopes had dry surfaces in terrain traveled. 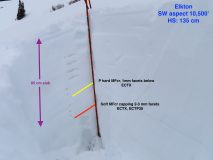 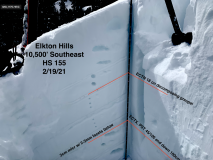 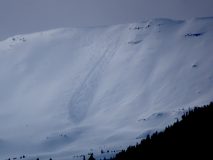 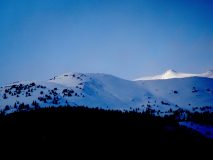 Believe this to be a recent avalanche on southeast alpine slope of Timbered Hill out Brush Creek. 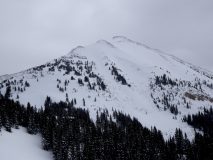 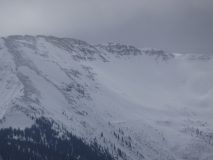