Subject: Cycle in the Slate

Widespread natural cycle yesterday and last night: extensive soft slab naturals that broke 1 to 2 feet deep on the storm interface (12/10 facet layer). Slides ranged from small to large (D1 to D2.5); most propagated across much or all of their start zones and ran to mid track. I estimate that 90% of the north or east facing paths or features in Happy Chutes, Climax Chutes, and Schuylkill Ridge ran (roughly 60 slides), as well as the west facing near treeline terrain below Baldy and Gothic (about 5 slides). Last night’s winds obscured the evidence of avalanche activity in the alpine. There were some fresh crowns triggered by wind transport last night (about 5), but more commonly, evidence of activity during the storm was subtle and harder to characterize. The most notable was the east face of Mineral Point which ran to valley bottom.  In contrast, the southerly aspects that we could see showed minimal signs of avalanche activity.
Today we or other parties near us appeared to remotely trigger a handful of soft slabs up to 2′ thick. These were on small pockets or features so generally harmless in size.

Weather: Cold temps, clear skies, some light wind transport observed off of a few high peaks but calm winds where we traveled.

Snowpack: We observed widespread collapsing and shooting cracks while traveling on low angle terrain of various aspects. Some collapses were localized, some were rumbling and traveled 100 feet or more and would shake trees or trigger small pockets. Settled storm totals were 60 to 70 cm at low elevations, sitting on our well documented 12/10 interface. Low angle slopes with a southerly pitch were collapsing on a thin meltfreeze crust, or just facets on northerly pitches. On steeper southerly pitches, the crust is thick and uniform to the ground, lacking a problematic facet layer that is so widespread on other aspects or on lower angle slopes.
Not much evidence of wind transport during the storm, but last night’s northerly winds redistributed surface snow near and above treeline into some small wind slabs that didn’t react to ski cuts today. 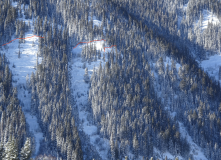 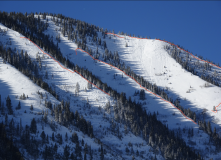 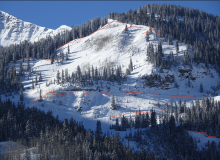 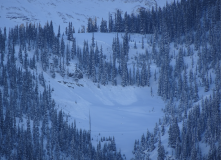 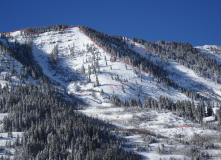 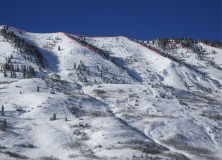 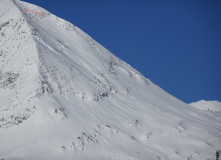 Large avalanche on east side of Mineral Point 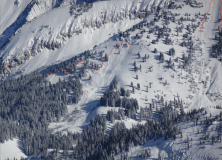 Several avalanches near treeline on westerly-facing slopes of Gothic 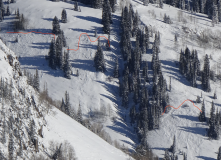 Natural avalanches below treeline on west-facing slopes near Pittsburg 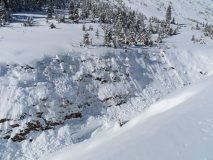 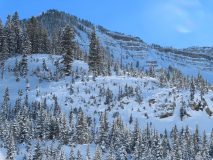 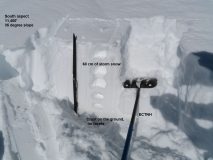 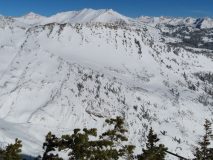 In contrast to widespread avalanche activity on E, N, & W aspects, this S/SW facing feature had no slides 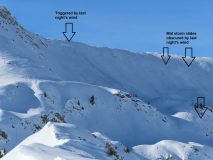 Avalanche activity in the alpine obscured by last night’s winds 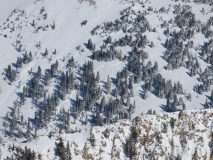