Avalanches: Nothing fresh, some D2 slab activity from last cycle.
Weather: Few clouds, light winds.
Snowpack: Less than an inch of new snow overnight preserved large grained surface hoar on the near and below treeline slopes that we visited. There was enough wind in exposed locations to destroy it.
Still getting semi-frequent collapses below treeline and a few collapses near treeline. The latter triggered by second person on skin track or from hard stomps. The collapses didn’t produce much for shooting cracks, but judging off of how far away trees were shaking, it seems that most radiated less than 20 to 30 feet. This is a notable improvement from collapsing observed earlier in the week. We didn’t travel much near anything steep enough to avalanche; the few small test slopes below treeline that we stomped on didn’t produce any results. See attached photo for a profile at 10,600 feet, which produced moderate propagating results (ECTP14) 50 cm deep on 2 mm, fist hard facets. 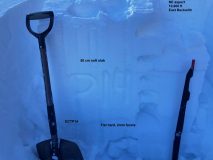 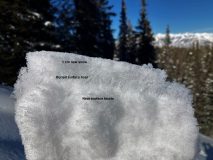 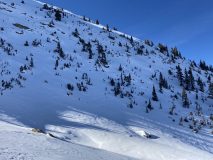 This is the type of terrain that we avoided today: Steep, northeast facing, windloaded with variable snow depths from rocks and trees.