Avalanches: The slow trickle of large avalanches continues. In Whetstone Mountain’s Hidden Lake bowl, a broad (~250′ wide) section of very large cornice released around 12,200′ and triggered a Persistent Slab avalanche that broke at the ground on a northeast-facing slope. The avalanche looked fresh.

Snowpack: Near and below treeline south and southwest facing slopes have previously drained water to the ground. Little concern for future Wet Slabs. East to southeast-facing slopes near treeline could still pose a near-term Wet Slab concern. Thin slabs (30-70cm deep) rest on presently moist facets. Recently the meltwater has stopped within the slab, but if the melt rate picks up quickly these aspects would be most concerning first. North of east both near and above treeline I found a dry snowpack. Where the snowpack was deeper, the slab was fairly supportive and strong. Triggering a Persistent Slab avalanche remains unlikely, but consequences remain ugly. On these slopes with a dry snowpack, shallow areas remained spooky. In areas with less than around 3 feet of snow, boot penetration would go to the ground. I didn’t experience any collapsing, but I did two ECT’s and both produced hard propagating results on faceted weak layers, one at the ground, one in a very weak layer of large facets below the March storm snow. 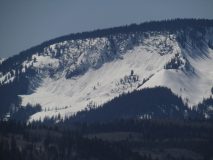 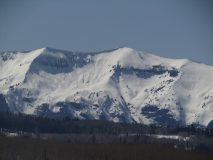 An old Persistent Slab avalanche in the West Elk Wilderness on an east-facing slope above treeline. 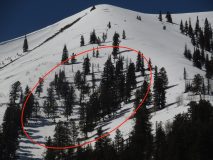 This southeast-facing, 35-40 degree steep start zone is a prime example of a location where I would expect Wet Slab avalanches to become a concern if temperatures do not drop below freezing later this week. 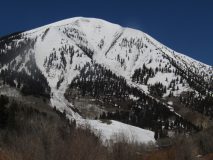 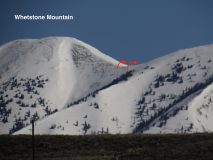 This is the west-facing fetch seen from the Ohio Creek Valley, looking at the backside of the ridge where the cornice fall occurred on Whetstone Mountain. 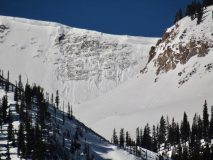 A large cornice fall avalanche on a northeast-facing slope on Whetstone Mountain. 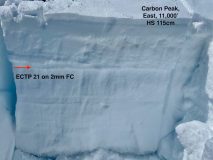 A propagating ECT test that broke on a very weak (Fist-hard) layer of coarse grained (2mm) faceted snow near treeline on an east-facing slope. 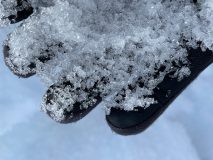 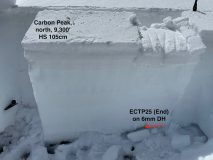 A propagating ECT test that broke near the ground on a north-facing slope below treeline.