One unreported slide was visible on an alpine subpeak of Peeler. Debris was buffed over in basin below but still just visible.

Snowpack: Started in valley bottom and made our way up to ridge top and performed 3 profiles along the way on N and NE slopes. This area has seen some traffic over the past few days, and we travelled/dug in the vicinity of other tracks. First off the snow surface in most places had Surface Hoar- it was largest at valley bottom and diminished in size as we climbed and disappeared shortly before gaining ridge top.
HS from valley bottom to ridge top ranged from about 70 to 100cm with drifted locations up to 125 in locations travelled – several ridge top start zones that have good drifting windward fetches presumably had much deeper HS but we did not enter these start zones. In general slab structure was still present throughout this terrain with cohesive slabs being the rule not the exception. Pungy thickets did have generally weak snow, but open slopes held to the rule of slabs. Old weak facets near the ground showed signs of rounding, but with minimal gain in hardness, in each test profile. The structure looked poor upon inspection and in hand hardness but generally failed to produce concerning stability test results.
Buried Surface Hoar(wedges) was found in each test profile location, 9500′, 10400′ and 11300′. Shovel Tilt Test made finding the layer fairly easy in the upper snowpack – it was buried down 8 to 11cm in test profiles. There is clearly no slab resting above it yet just a few inches of low-density snow but if this layer does get loaded at some point in nearish future it could cause problems on shaded aspect near and below treeline not to mention the Surface Hoar currently on the surface.

We travelled off the beaten path in a few locations probing into different spots to establish general HS heights, locations that already slid this year during Thanksgiving avi cycle were more around the 60cm range and did not have much of a slab. 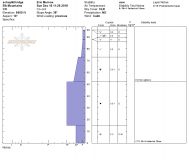 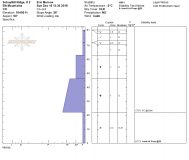 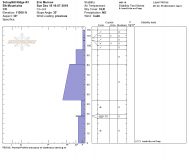 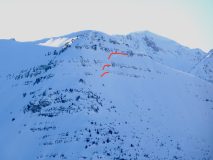