Avalanches: visibility was often obscured but glimpsed a handful of very small debris piles below steep rocky areas – would guess some minor sloughing of the recent precip of rocks.
Weather: Skies were mostly cloudy with a low cloud deck. Very light to light snowfall from 10am to 330pm. New snow accumulation since 1/19 varied from a bit more than 2inches at Slate TH to 6″ at 11k in Baxter Basin. Winds were light with some moderate gusting. Observed some snow transport.
Snowpack: Went for a walk through Baxter Basin and wrapped around past Daisy Pass checking on old snow surfaces below the snowfall from the past few days. On wide-open terrain that faced NW-N-E at 11,000′ there was a pretty even mix of soft facets, thin soft windboard, and pencil hard windboard below 6 inches of recent, low-density snowfall. Variation of old snow surface was significant even on the same features(see photos of variation). On a couple of drifted features, I was able to produce cracks up to 10 feet where recent winds have deposited thin, soft slabs.

Briefly traveled on some low elevation features with a weak, faceted snowpack (see photo of a below treeline, east-facing slope that is a total weak faceted mess). Old surfaces here were very weak and I would anticipate that it will not take much loading before avalanches start running with the incoming storm. I would expect avalanches to entrain and gouge easily on shady, below treeline slopes. 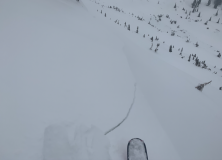 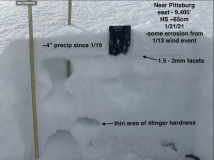 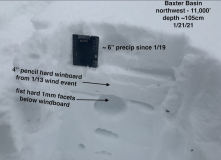 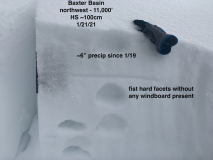 Soft facets below the recent snowfall