Avalanches: Skier triggered very small wet looses on E aspects, and very small dry looses on due north. Both confined to very steep terrain.
Snowpack: Cornice about 100 yards long pulling way back from the Wolverine Ridge. See photos, pretty cool if you’re on the right side of it.

Avalanches: Not sure when these ran or if they’ve already been documented. North end of Schuylkill ridge, probably ENE facing? And Purple Ridge near Poverty Gultch, SW facing. See photos.

Weather: Windy AF up high, in and out of clouds, cool air temps

Estimate* 3/29/21- 1- >TL- E-C-N-R1-D1
Estimate* 3/29/21- 1- >TL -SE-C-N-R1-D1
Weather: Ridgeline Wind Speed: Calm
Wind Loading: None
Temperature: 53 F
Sky Cover: Few
Depth of Total Snow: 120 cm
Weather Description: 53 degrees at 10,000′ at 3pm.
Snowpack: Near 10,000 feet, on northwest through north to northeast-facing slopes, the snowpack was mostly dry, with meltwater draining down only around 10cm so far. Below and near treeline, the shoulder aspects of east and west look the closest to developing a Wet Slab avalanche problem. The steeper southeast through south to southwest-facing slopes are wetted to the ground and melting out quickly. At the Butte snotel at a similar elevation, it did not freeze Thursday night, and it may not again tonight (Friday night). In the worst case rocky terrain features rocky with a shallow snowpack, human-triggered Wet Slab avalanche may become possible by late afternoon Saturday. If there’s another night without a freeze on Saturday, natural Wet Slab avalanches might run Sunday. 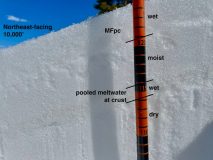 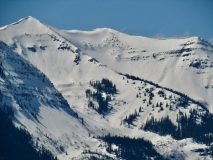 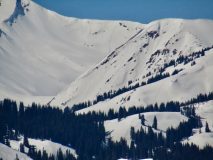 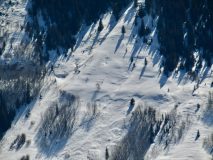 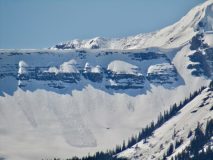 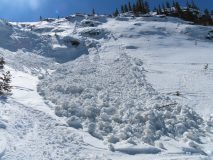 Spring has sprung. It’s getting hot out there and liquid water is making its way deep into the snowpack. See what this all means for spring skiing right here.

Avalanches: Observed several Wet Loose avalanches, both natural and human triggered. Size ranged from D1-D1.5 with activity primarily on steep East, South and Southwest slopes near and above tree line. While traversing the Ruby spine we encountered several large overhanging Cornices which had begun to pull back from the ridge. Two of these were triggered from dry ground on the ridge by simply “pole whacking” the gap.

We got a close look at the previously reported Cornice Avalanche on the SE flanks of Mt Owen. This was a big section of cornice that fell down and resulted in a large D2.5 avalanche. The cornice initially gouged close to the ground in steep rocky terrain, then appeared to run on March interfaces as dust layers can be seen on the bed surface.

Weather: It’s heating up! We skinned in t-shirts most of the day. Temps soared above freezing at all elevations today under abundant sunshine. Westerly winds were light at rideline.

Snowpack: We travelled primarily on sunny aspects from E-S near and above treeline. By 12:00, we observed several small natural Wet Loose avalanches on steep East aspects near tree line. As the day progressed, action moved to South aspects and eventually Southwest slope near and above treeline. While these avalanches were only entraining the upper few inches of wet snow, they were gaining momentum on larger slopes. Skiing off the ridge in the late afternoon, we choose to avoid our intended ski objectives that was south east facing above 12,oooft to due to the fact that we would be triggering loose wet avalanches and didn’t feel we could safely manage the problem on that terrain feature. While briefly hanging out on the bed surface of an old cornice avalanche you could actually hear water cascading somewhere. Sounded like you were standing next to a running water fountain.

Cornices, which have grown large throughout this season on certain leeward aspects, proved to be sensitive where large portions are overhanging ridges and are beginning to pull back from ridgeline. These babies are very unpredictable with some being resistent to cutting while others may be triggered by simply hitting the right spot or right time of day. These beasts were best managed by avoiding traveling on or below slopes where present. 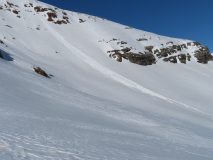 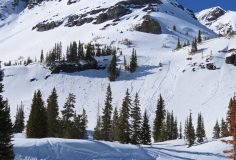 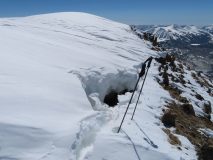 A large section of cornice pulling back from the ridge. This cornice released after a few pole whacks near the gap minutes after this photo. 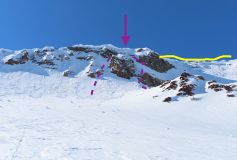 Looking up towards the large triggered cornice fall with previous avalanche to the looker’s right. 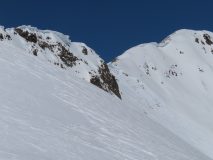 Looming cornices in the fore and background with the previous large, cornice triggered avalanche in the middle.