Avalanches:
Observed several natural Storm Slabs prior to noon along the Kebler Pass corridor prior to TH, small, steep northerly-facing slopes. around 6 inches deep, below treeline.

Observed a natural avalanche that ran through the “friendly finish” area of the Anthracites. This failed sometime in the afternoon. Could not see crown due to visibility but presumably failed in the drifted start zone above. Although debris was shallow, it was able to run to the valley floor, east facing.

Weather: Obscured skies between 1130am and 430pm out Kebler Pass corridor. Westerly winds transported some snow near ridge top, but less than I would have predicted. Wind speeds at this location generally remained below 20mph at ridgetop. Snowfall was continuous all day with rates between S1 and S3.

Snowpack: New snow accumulations at 11,300′ around 4pm were about 20″ with 1.4″SWE. The new snow was settling to some degree while it was accumulating during the day. New snow was relatively low-density with exceptional ski quality. There was an interface around 2 or 3 inches up in the new snow that was easily identifiable in hasty hand pits that I would suspect was responsible for most of the skier-triggered Storm Slabs in the area (only stuck my mitts into two crowns).

Terrain features that were being pressed or loaded by the wind started to feel top-heavy at the end of the day. Cracks up to a ski length became more common towards later in the day as the snow continued to settle. 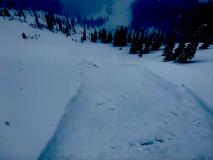 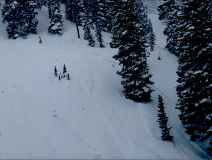