Avalanches: Everywhere on East slopes, with many north and some southeast with start zones generally ATL and running long seemingly due to wind loading being the straw. Most appeared to go to ground in at least some parts of start path and step down. Pictured: D2.5+ schuylkill peak. D2 on angel ridge. Ran long. Almost to creek on both and thru lots of terrain often too flat to ski. Hard to tell height of crown but visible ground underneath crown.
Weather: Warm At valley bottom with cold wind As you got into Baxter. Sunny, didn’t see evidence of too much warming on southern slopes at that elevation although a crust on south wouldn’t surprise. Windy ridge tops with visible and constant transport on east facing slopes.
Snowpack: Finally supporting sled weight. Lower angle north trees had wind texture and somewhat thicker snow, but overall fun and fast powder. Didn’t dig today as the evidence and warning signs were apparent, last storm snow had been significant and wind loading especially on East faces was obvious from the avalanche activity. 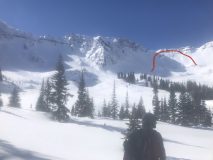