Avalanches: We got a window of mediocre visibility of Peeler Peak and Scarp Ridge and didn’t see any noteworthy avalanches. Saw a pair of D1 storm snow avalanches on Schuylkill Ridge that ran yesterday; one was skier triggered, the other natural.
Weather: Very light snowfall (S-1) and calm winds all morning. Around 2 p.m., southwest winds increased to moderate and we observed a half-hour of heavy snowfall rates (S5). About an inch or two of accumulation all day.
Snowpack: 10″ to 12″ of settled storm snow over the well-described 1/19 interface. We observed a couple of collapses and got shooting cracks on three different slopes. Not a clear pattern to these: some were valley bottom, some mid track, and some near ridgetop. All of the signs of instability were on flat or shaded aspects where the 1/19 interface is weak, faceted snow (as opposed to a fair amount of windboard that also exists on the same aspects, or sun crusts on southerlies).
We tested a number of steep slopes with ski cuts and cornice drops with no avalanche results.

Shooting cracks and a collapse near ridgetop. East aspect NTL 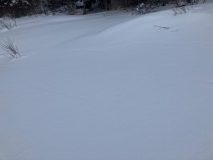 Shooting cracks on a flat slope near valley bottom