Innumerable remote, natural, and ski cut triggered D1 avalanches within the storm slab. Crowns broke down to the old snow, but primarily slumped and stayed in place with the exception of the top 5-10 cms of new snow which did not run far. Avalanches were concentrated to convex rolls over 38 degrees. The largest slide was triggered by a ski cut near rocks on an old bed surface and piled up enough snow on the uphill side of trees to bury someone to their waist but would not have ended their days- larger D1 with a crown of 70m wide and 40cms deep (SS-AS-R2-D1+-I).

Snowpack: 45 cms of new snow by 2pm!! That’s a foot and a half for you imperial goons. The new snow doubled the existing snow depth in spots. Old snow interfaces were a mixture of sun crust on E-S aspects and faceted dry shallow on anything with a hint of North to it. 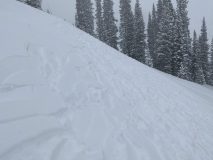 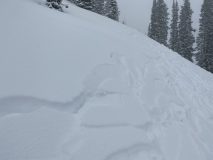