Weather: Cold with temps in single digits to low teens. Low clouds in valley bottom gave way to sunny skies midday before orographic clouds rolled back in from the NW. Winds calm in sheltered terrain on the climb to ridgeline where moderate NW winds greeted us.

Snowpack: 1-2″ new snow overnight. Below and near treeline slopes had an HS of 50-70 cm. Open and steeper slopes held stacks of crusts with weak snow in between while low angle slopes and more easterly aspects were mostly faceted and lacking any slab. Moving above tree line, the snowpack is quite variable with many windward slopes stripped clean while gullies and inset features on South and West aspects have been cross-loaded and are holding much more snow. Recent snow and wind created very isolated and small wind slabs. On due south, supportive crusts on steeper upper elevations slopes gave way to thinner breaker crusts on lower angle terrain. 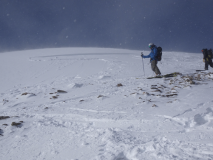 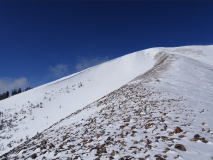 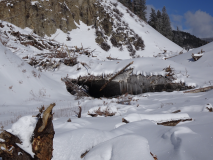