The week started off dry and extremely cold with valley temperatures on the morning of January 7th ranging from -25 to -35 F and mountain temperatures hovering just above zero. That weather did not last long as a very moist and warm air mass started infiltrating the area on the 8th from the west-southwest causing snow showers to ramp up again after last week’s snow. This air mass continued flowing into the area from the Pacific through the 9th bringing with it impressive amounts of precipitation and strong winds. With temperatures hovering right around the freezing mark, the precipitation fell as very wet snow. On the night of the 9th a cold front passed over initially causing heavy snowfall and strong winds, but eventually allowing for a lull in the storm on the 10th. From the 8th through the 9th Schofield picked up 5” of SWE and 26” of snow with 3” of SWE falling in a mere 16 hours on the 9th. CBMR received 2.5” of SWE and 30” of snow. On the 9th, the Crested Butte Community School closed for the first time since 1970 and CBMR closed early due to safety concerns. People were calling it the snowpocalypse. 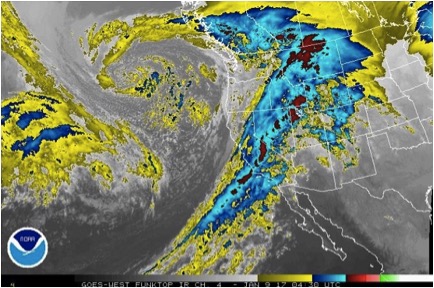 1/9/17 – Satellite image from the National Weather Service showing the abundant moisture beginning to hit Colorado from the Pacific.

On January 12th a low pressure system off the coast of California began to sag towards Baja and cut off from the main atmospheric flow. The southerly flow of this cut off storm sent warm temperatures and one more significant plume of moisture into our area resulting in another 1.4” of SWE falling at Schofield. 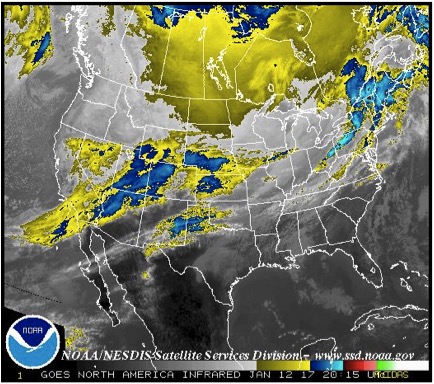 1/12/17 – Satellite image from the National Weather Service showing moisture from the cut off low impacting Colorado.

Since January 1st, the Gunnison Valley has been in the bull’s-eye for moisture from the Pacific. After that last plume of moisture on the 12th, Schofield pass now stands at 14” of SWE since the storm cycle began on January 1st. That makes this storm the largest in history since the Schofield Snotel was established in 1985! As of January 12th, the Gunnison River Basin snowpack is at 166% of normal for this time of year. That means the snowpack is already deeper than it ever got during the 14/15 season, and it’s only early January!

The week began with avalanche conditions beginning to stabilize after the previous week’s snow with considerable danger on the 7th dropping to moderate on the 8th. The impressive snow amounts that fell on the 8th and 9th added a large load to the snowpack, causing the avalanche danger to rise to high with an avalanche warning on the 9th. With heavy snow and strong winds continuing through the week, the avalanche danger never fell below high. On the 11th, an extreme (L5) avalanche danger was issued, a rare occurrence. Since 1985 we have only seen 4 or 5 events that met that criteria. In this case, the historic amount of snow that fell since January 1st created a massive slab that was sitting on a number of persistent weak layers that were detailed in last week’s summary, including crusts, facets, surface hoar, and depth hoar. Very large storm slabs were also running. Both of these problems were forecasted to be widespread and large enough to run into valley bottoms and reach historic lengths.

With snow continuing to fall through the end of the week, we haven’t gotten good enough visibility to observe this storm’s avalanches out in the mountains. Still, we have had reports from across the state that indicate the historic nature of this storm with avalanches running across Taylor Canyon, I-70, and Red Mountain Pass, local roofs collapsing and historic mine structures demolished by avalanches. Locally, two avalanches ran across Kebler Pass road (first, second), a patroller was caught in a slide at CBMR, and many avalanches up to size D2.5 were reported even with our limited visibility. Large roof avalanches were also common in town.

1/9/17 – Natural D2.5 persistent slab avalanche on Red Ridge that ran to the ground in places.

1/12/17 – Debris of an avalanche that crossed Taylor canyon into a popular fishing hole. Definitely large enough to kill a fish!