Avalanches: SS-N-R2-D1 noted in the saddle between Ruby and Owen. Looks to have run mid storm. Some debris piles noted on the East faces of Ruby and Owen looks like dribblers that also ran midstorm.
Weather: Sunny, hot! +4 at 11 am at 12,000′. Calm winds becoming light from the West afternoon.
Snowpack: Average about a foot of snow, rapid settlement throughout the day. Intermittent old snow either 4-6 cm of 1-2mm facets or an old crust. Mostly just the new snow. Near surface facets noted in the cold morning, gone by afternoon. Full snowpack was moist by 2 pm.

Avalanches: Skier triggered one soft slab on a NE feature above treeline that failed on the storm interface about 15″ deep, on faceted snow. Small in destructive size. SS-ASc-R1-D1-I. See photo.
Weather: Light snowfall continued all day, with pulses of moderate snowfall. Calm winds. Overcast skies.
Snowpack: Storm snow depths increased from 10″ at 10,000 ft to 20″ at 11,700 ft in a NE facing bowl. Fist hardness and right-side up, but cohesive enough to form a soft slab. No signs of instability where the storm snow fell on dirt. At 11,300 ft, we first encountered old snow layers at the bottom (1mm facets), and immediately began seeing shooting cracks (~5 feet in length) and getting soft collapses. When we ventured to SE facing slopes which held melt-freeze crusts at the bottom of the snowpack, we did not see any signs of instability, and the new snow appeared to be bonded well to the storm interface. No signs of significant wind transport, but we stayed low in the bowl and avoided the higher, potentially wind-loaded ridgelines.

Avalanches: 2nd hand report to CBAC of a wind slab triggered while climbing on the east face of Mineral Point. The crown was roughly 1 foot deep and estimated 20-40 feet wide, on a windloaded terrain feature, D1 in size but large enough to carry you over cliffs 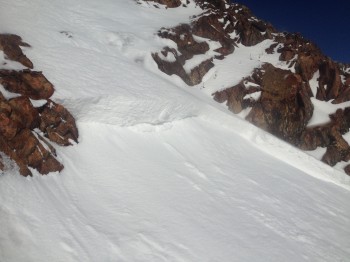 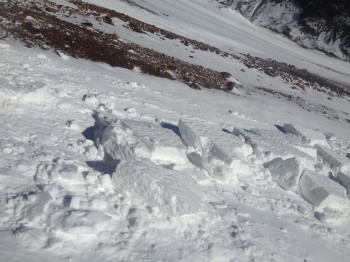 Avalanches: Saw a previously triggered (assumed to be natural) wet loose/slab on a SSE aspect R1 D1 with a crown around 3-4 inches. Also skier triggered a wet loose R1 D1 on a SW slope with exposed rock nearby.. Slide started small but pinwheeled and picked up snow on 5-10cm crust on the ground.
Weather: Sunny and breezy with clouds increasing during the day. Little snow transport witnessed.
Snowpack: Snowpack is largely on slopes that were loaded from the storm earlier this week with strong NW winds. Many windward slopes blown clean of snow. The base of the pack on solar aspects ranges from crusts on the ground to no snow at all. This was topped with a dense wind slab of varying thickness dependent on the slopes’ relation to the wind. The small dusting of new snow sat on top.

Avalanches: No signs of instability except for very shallow and isolated cracking in areas with recent wind drifting (only a couple inches deep) Not much in the way of avalanche concerns.
Weather: Few clouds. Moderate to strong ridgetop winds from the NW, but no snow transport.
Snowpack: Continuous snow coverage begins around 11,000 to 11,500 feet, and is spottier on south aspects. Total snow depth is generally less than 10″, but up to 2 -3 feet in windloaded areas. On southerly aspects, the snowpack is comprised of one or multiple stacks of crusts, with 1-2mm facets below or between in some locations. The surface became moist today. On northerly aspects, the snow surface is a mixed bag of wind crusts, sastrugi, dense rounds and near surface facets, all showing signs of surface faceting. The snowpack is mostly rounded and relatively dense, except in the shallower, wind protected areas which have 1 mm facets throughout. 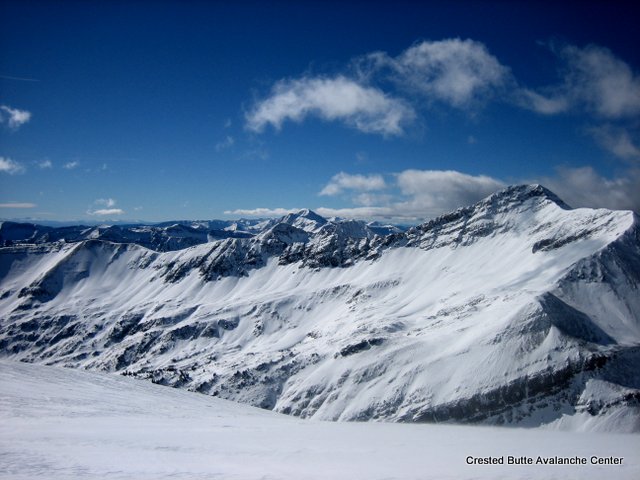 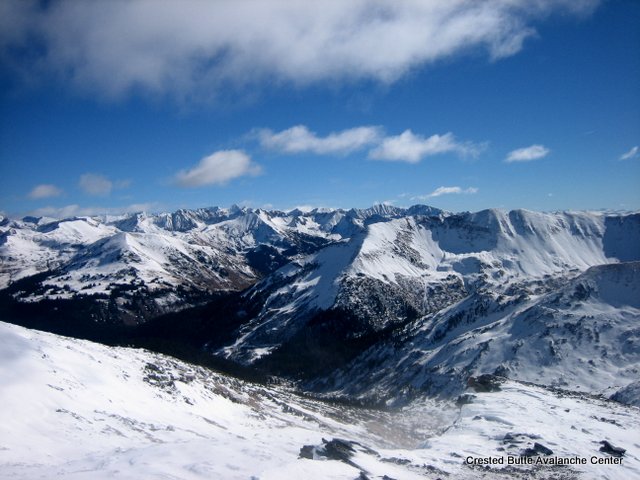 Snow coverage on the west side and north side of Mt. Baldy and surrounding peaks

Avalanches: Observed a previously triggered point-release on a W – NW aspect near WSC bowl on Baldy. Likely occurred 10/23.
Weather: Warm and clear during the days with clouds increasing Sunday.
Snowpack: Most snow accumulation is around 11,000 feet and above. Little avalanche potential otherwise as there is simply not enough snow to form slabs. The exception is up high in very windloaded areas. A snowpit around 12,700 feet on a E-facing windloaded slope (Treasury) showed a pack of 110 cm with uniform layering . ECTN. Typical mixed bag of conditions elsewhere where snow had accumulated with suncrusts, wind crusts, and dry snow in the suspect areas. Did find basal crust on rocks under dry snow on N-facing slopes around 11,000.