PRELIMINARY DETAILS of an avalanche accident on Schuylkill Ridge in Birthday Bowl area.

2 skiers descended into the skier right side of Birthday Bowl. After a short first pitch, skier 1 was skiing to the right of the Birthday Bowl gully, while skier 2 was posted uphill of skier 1 watching from some distance below the ridge.
Skier 1 heard skier 2 yell, saw snow moving around him, was caught in the slide briefly and pulled under the snow.  After popping back to the surface he was able to exit and arrest by grabbing a tree, moving maybe 100′ downhill. Skier 1 sustained lower leg injuries and lost some gear. After calling 911 to initiate a rescue response learned that skier 2 had already called 911.  Relieved that his partner had called 911 too, skier 1 walked down the skier’s right side of the path to the toe of the debris and found skier 2’s partial burial site and tracks heading downhill.

When the avalanche released, skier 2 yelled to warn skier 1 but was pulled off his feet from his stationary position and carried downhill approximately 1000′ vertical feet in a very rough ride. He sustained substantial injuries along the way from impacts with trees. After coming to rest partially buried on the debris pile, skier 2 initially switched their transceiver to search and did not find a signal. He too contacted 911. Severely injured and without any information about the position of his partner yet, he then began to crawl downhill. 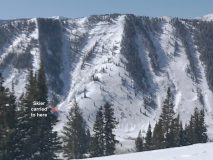 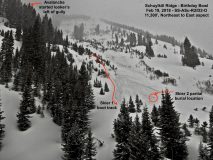 Photo of debris and exit track of skier 1, and partial burial location of skier 2. 2/19 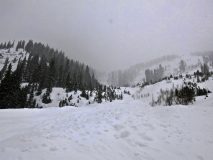 The avalanche initiated from below the ridge, near the center of the photo.