Avalanches: A couple of new D2 persistent slabs that looked fresh and likely ran in the past 12 hours from windloading, one BTL, and one NTL. Another one that looked a couple days old NTL. And a handful of previously undocumented big dawgs that likely ran during the main event around 2/13, give or take a day. See photos for details.
Ski triggered a few harmless wind slabs, 4-6″ thick.
Weather: Partly cloudy overhead and mostly cloudy over the Northwest Mountains. Moderate northwest winds with strong gusts. We observed generally light snow transport below treeline, moderate transport above treeline, and a short period of intense transport this afternoon. Temps remained cool.
Snowpack: We experienced several rumbling collapses and shooting cracks below 10,000′ in elevation. They were triggered as we transitioned off of thicker, windloaded persistent slabs (on easterly aspects) to a shallower, softer snowpack on flat terrain…slab thickness was about 20″ where we go the collapses.
Above 10,000′, the structure is still crap but the slabs are consistently thicker and less reactive underfoot: we saw a lack of signs of instability and hard, propagating test results on basal weak layers.
Above treeline, strong winds were eroding slabs away on windward aspects (W/NW). We felt comfortable skiing in avalanche terrain where the slab structure was obviously stripped away. You could certainly find persistent slab structures in gullied features or lower in alpine start zones on these aspects. 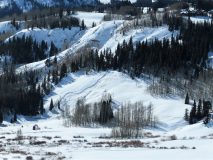 D2, easterly below treeline. Likely ran past 12 hours from windloading. 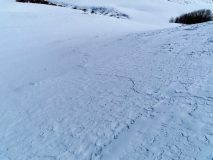 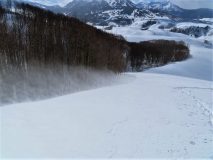 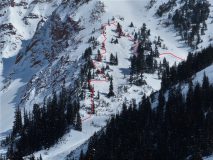 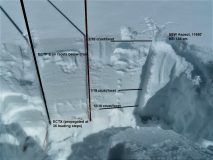 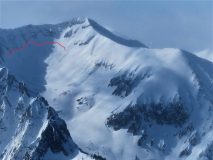 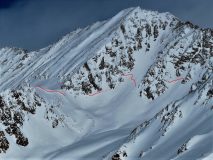 Better angle on a previously reported D3 off of Avery 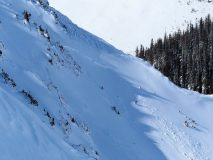 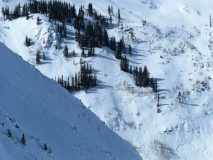 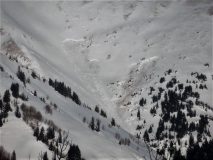