Weather: Mostly clear skies with warm air temperatures. Westerly winds near and above treeline were brisk and continuous. Observed modest amounts of snow transport onto northeast, east, and southeast slopes but loading was fairly light as lots of snow was being blown into the atmosphere or lower on to slopes.

On south-facing slopes below treeline in the afternoon I found an HS 130 cm at 10,600 feet. This site had a few inches of wet surface snow with a soft crust below and dense moist snow below that resting on a very thick melt form layer. Wet concerns on this terrain remained near the surface with little chance of gouging. Closer to the trailhead at 9,600′ I found a shallow, wet snowpack that appeared capable of producing wet loose avalanches that could entrain much of the shallow snowpack. See photos.

West aspects near treeline became moist even with the wind, but did not produce loose avalanches. 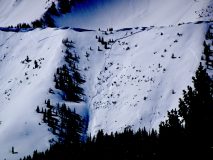 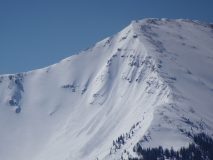 Recent cornice fall that did not produce any significant slab failure 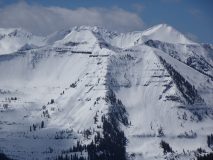 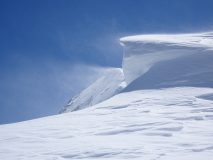 Drifting on alpine ridge line. Much of this snow was blown into atmosphere or lower down slope. 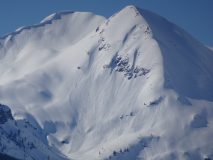 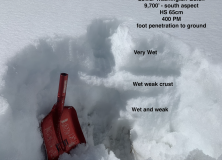 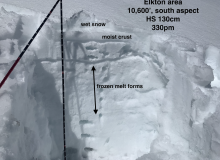 Deeper snowpack on south slope with wet concerns only in surface snow.