Avalanches: Observed one fairly recent significant avalanche on Schuylkill Peaks east face. Appears as though a cornice fall triggered a relatively deep slab but did not propagate particularly far for the depth of failure. see photos

Snowpack: Traveled through several short west-facing slopes on Snodgrass. HS through this terrain averaged around 115cm. The snow surface was a thin(1cm) and soft melt/freeze crust on due west slopes up to 10400′. Upper snowpack was up to 4finger soft slab resting on very weak facets in the middle of the pack which sat upon stronger facets above the ground (see photo). Hard propagating test results on this very weak snow in the middle of the snowpack but no collapsing or cracking on test slopes. A poor looking structure that could produce an avalanche on steep terrain or at locations with additional wind-loading. I would expect shallower portions of the forecast area to the east of Crested Butte would have even less slab formation on westerly slopes below treeline. 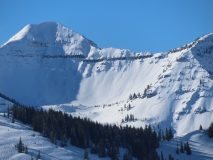 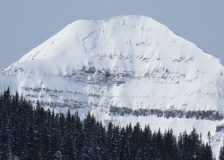