Snowpack: Traveled up onto Teo ridge from West Brush Creek looking at slab structure to the east of Crested Butte. Profile dug in an east-facing meadow at 11,200′ found HS 78cm with cohesive slab resting above old, weak facets at the ground. Test results CTV and ECTP16. This structure produced numerous rumbling collapses in nearby areas.  HS on south and southwest facing near and below treeline was around 40cm.  Southerly terrain produced collapses as well but not nearly as large as east-facing terrain.  Southerlies had a double crust with facets beneath.  South-facing slopes below treeline had become moist by the afternoon.  Poor looking structure in most terrain traveled.  HS at 9900′ in valley bottom below Teocalli was around 5ocm. 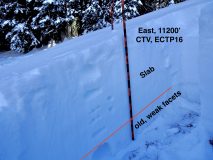 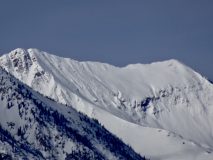