Avalanches: None observed
Weather: Light graupel early in the morning, periods of very light snowfall (S-1) before noon. SW winds increased from moderate to strong as we left for the car around 12 pm.
Snowpack: We were curious to see how the snowpack structure looks on the border of our SE and NW mountains before the loading event. We traveled in below treeline areas mainly on west and east aspects. Our average HS was 80 cm. Generally, we found a 30-35 cm slab sitting on top of the 1/19 interface. The 1/19 interface consisted of incredibly soft (F-) large faceted grains. The slab hardness increased as you got deeper in the snowpack reaching 4F near the bottom of the slab.

On a small east facing convexity, we produced a loud collapse along with shooting cracks that radiated throughout the top of the convexity. A quick compression test near the collapse produced failure on the 1/19 interface during isolation of the column. After a couple more loud collapses, we decided to ski mellow creamy pow down to the road. The current slab is sitting on top of an extremely weak structure, we suspect it won’t take much new loading before we see results in these shallow, weaker areas of the forecast zone. 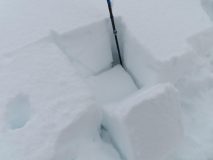 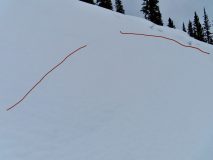 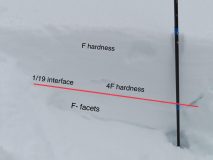