Avalanches: Intentionally skier triggered a few small loose dry avalanches entraining the top 6″ of faceted surface snow. They ran about 600 vertical feet.
Weather: Few clouds, calm winds, mild temps above the inversion.
Snowpack: Still getting abundant collapses while breaking trail in untrafficked terrain. Persistent slab structure was about 18″ thick on average. Below ~10,000′, the slabs are so weak and faceted that the collapses only radiating a few yards (on northeast aspects). On east aspects at these lower elevations, we got a few collapses that propagated up to 20′ or so where there is a crust at the 12/10 interface helping to drive propagation. Avalanches at this elevation would be quite small and fairly isolated.
Above about 10,000′, the slabs get stiffer (up to 1F-). Collapses require a stomp or two, but they radiate across entire clearings (which were 50 feet or less where we traveled). Moderate propagating results in stability tests.
The snow surface continues to grow weaker. Large grained surface hoar is widespread except in wind exposed features. Near surface faceting is prevalent, and shallow facet sluffs are easy to trigger. Slopes that have previously avalanched (of which there are many), have an even weaker snow surface due to their shallow depths and stronger temperature gradients. The ones we poked at have an old bedsurface crust below all of the weak junk, which will make for an even more dramatic hardness difference when these layers get buried.

Shooting crack on an east aspect at 9,450′. A thin crust above the buried depth hoar helped drive the propagation further than similar collapses on northeast aspects 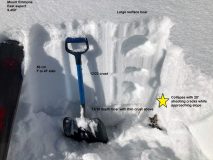 Snowpit where we triggered the collapse and shooting crack (previous photo) on an east aspect at 9,450′. 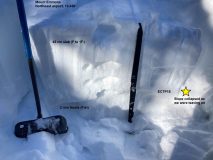 Denser slabs with collapses radiating further as we gained elevation above 10,000′ 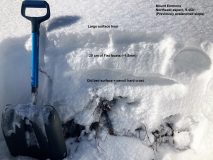 Slopes that avalanched in December have a weak snowpack structure that will be an issue if we get more snow.