Avalanches: Plenty of cornices that have released above treeline. Some were old and some looked fresh or at least recent. I didn’t observe any new cornice falls that also triggered a deeper slab avalanche below. Plenty of loose wet avalanches at all elevations from today and past days. Most of the natural activity has been on east south and west. Saw some roller balls on a NTL NW aspect and plenty of shiny snow surfaces around the compass.

Snowpack: Started the late morning off checking in on an ENE aspect at 9,200ft near Crested Butte. HS was ~100cm. Last night’s freeze and surface crust was about 18cm thick. The wetting front had moved through the early march interfaces. While the old facets in the lower half of the snowpack were of course moist. CT results produced hard non-planar breaks in those facets. Once that crust broke down later in the day. A loose wet avalanche problem, that could gouge into the rest of the snowpack, would have been the primary avalanche problem.

Headed out Washington Gulch in the afternoon. Loose wet avalanches appeared to be the main avalanche problem. Foot pen was often around 30 cm’s into wet snow, but the snowpack was supportive. I found a couple of areas that I punched through the snowpack into wet snow at the ground. Where I found a punchy snowpack I didn’t observe any collapses. 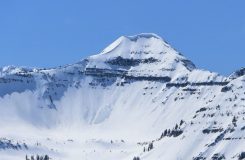 Loose Wet Avalanches on the east face of Schuylkill Mountain. 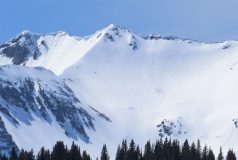 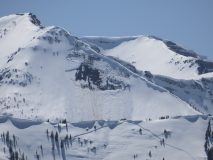 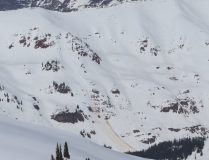 Start of a loose wet avalanche from a small point. That moving snow accumulated mass as it descended, gouged deeper into the snowpack and became large in size. SW, NTL. 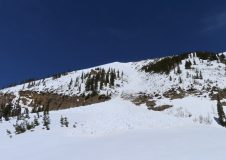