Avalanches: Many natural avalanches on below treeline slopes facing east to northeast. In general, the south side of Washington gulch has natural avalanche activity down by the reservoir and homes, on up to Coneys and beyond. These avalanches ran on Friday or Saturday. Many of those avalanches were small, a few where large in size. All appearing to release on old weak snowpack.

The above treeline Southwest Flanks of Gothic Mountain had 2 large windslab that ran early this morning.

Easterly and southeasterly terrain above treeline on Mt Baldy had one large persistent slab, and one smaller slab that may have released yesterday.

Snowpack: Last night’s wind event was very evident looking around. In the Coney’s area, the winds mostly cross-loaded and blew up the terrain. The resulting wind-boards trashed much of the skiing, unfortunately. The new snow was notably thicker today, compared to yesterday. The persistent slab avalanche problem was less reactive than yesterday, but still making noise with collapses and shooting cracks while traveling on terrain less than 30 degrees. 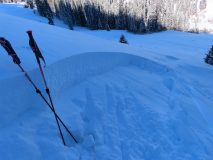 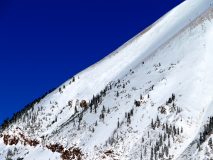 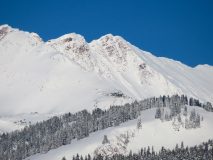