Avalanches: (I realize Taylor Park is outside of the CBAC forecast area, but figured since it’s close and most easily accessed through our county I’d provide some basic observations, if appropriate).

No avalanches observed due to slopes traveled through being less than 30 degrees in pitch, and low visibility preventing us from seeing other surrounding peaks.

Multiple small-large collapses in low angle terrain. 2 slab fractures/collapses on wind-loaded convexities, with both slopes in the 28-30 pitch at their steepest, and cracks propagating 30-60 feet. On inspection of the second collapse, 1F hard wind slab appeared to have broken on basal facets. The snow pack here was deeper than anywhere else probed during the tour, about 3 feet.
Weather: Low visibility, S1, winds estimated at 0-20 mph, temps ranging from roughly 30-20 degrees.
Snowpack: Very variable! Ranges from a few inches to about 3 feet. In many places the entire snowpack was faceted through. In some places we found F-1F slabs on top of facets. In a few isolated wind tunnels we found P hard slabs that we couldn’t get to collapse or crack with two people jumping on. Overall it appeared that the western portion of Taylor park did not receive much of the recent snow. 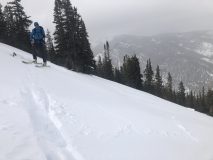