Avalanches: Nothing new to report
Weather: Mostly clear skies, reasonable air temps, but guessing a fair bit cooler than areas above the inversion.
Snowpack: Very short tour walking about near valley bottom below Climax Chutes at the low end of Slate River Valley. Checked on snowpack where I would expect slabs to facet the quickest on shaded slopes. Ski pen was generally 6 to 8 inches with snowpack depth around 70cm (a bit more than 2 feet). Walked through areas with no previous traffic and only produced one notable collapse but stomped/jumped in many places looking for one. Many slopes in this area had previously cracked/collapsed this past week, likely during the loading event around the 28th or 29th. Slab is soft but still present even in the inversion zone, no propagating test results – see photo (profile location did not show evidence of the previous collapse but ya never know). 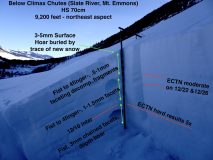 Test profile from near valley bottom on a northeast slope