Avalanches: Kicking cornices onto an easterly facing slope at ~11,700ft, mostly produced loose snow avalanches and a few thin wind slabs. The largest cornice was about a VW Jetta size. That one was a hair-trigger, as it had grown off of a faceted root and a rocky outcrop. That Jetta landed on a loaded section of the slope below, that was further perched between other rock outcrops. A 45 to 55cm slab further pulled out. That slab didn’t propagate notably far in the terrain and produced no results on the more uniform snowpack it eventually ladened on. D1.5 in size.

Weather: Broken cloud cover with bits of sun coming and going. The Ruby Range hung in the clouds the most and of course further east appeared to have fewer clouds. Winds appeared to be the strongest in the morning. Around 10am at the trailhead blowing snow was light, by the time we claimed into the alpine midday, blowing snow was also light.

Snowpack: Well, I called about 5″ of recent new snow near Elkton. My partner called 1″, I’m going to go with my number… Less snow than expected. The previous winds made measuring new snow depths pointless near and above treeline. Lots of hard wind-board from the extreme wind event, sitting just under the new snow. Of course, lots of old crusts out there too making for some scrappy, but low hazard skiing. The main avalanche problems encountered where fresh Wind Slabs and Cornice Hazards.

The extreme wind event made some monster cornices. No wonder we saw so many big avalanches below corniced ridgelines. 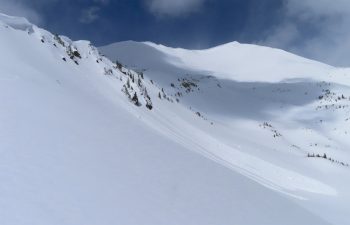 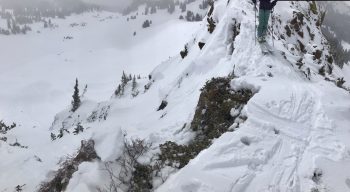 Skier Trigger Cornice, that further stepped down into a deeper slab avalanche. 3/28