One fresh natural avalanche below treeline immediately above valley bottom. NW winds blowing down valley were able to crossload a small terrain feature. D1 in size but put a bit of debris in the creek bottom.

Weather: Partly cloudy skies filtering the sun, increasing throughout the day. Air temps were on the cooler side of things. Winds were light with moderate gusts out of the NW in the BTL and NTL terrain we travelled through. Snow was being transported in the alpine on to E and S aspects during the day.

Snowpack: In general, the snowpack was becoming weaker and more faceted in most locations. Winds have done a number on open terrain even well below treeline close to valley bottoms.
While ascending very open easterly terrain around 30 degrees, average HS around 70cm, there was a thin 1.5 cm breaker crust below the most recent snow of a few inches. Facets below this crust were obvious and the snowpack structure beneath still possessed some hardness around 4f but was faceting. Only isolated deeper drifted spots held onto 1 finger hardness.
At around 11,300′ poked into a few NE and N aspects and found HS closer to 110cm. The Thanksgiving and post-Thanksgiving storms still had 1finger hardness resting upon basal rounding basal facets. Nothing really surprising about this structure. Beneath the 5 or 6 inches of new snow were near surface facets that in one drifted spot produced cracking up to 10ft on a steep roll. 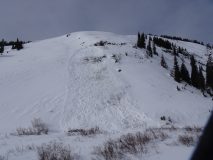