Avalanches: Observed a good number of previously unreported avalanches from the last significant loading event around February 13th or later from wind-loading. Below treeline there were a few natural avalanches on east through north features. Near and above treeline previous avalanche activity was observed on west, northwest, north, northeast, east, southeast, south and southwest aspects. Wind-loading was able to overload weak structures around the compass at upper elevations. Many of these avalanches were in terrain features that were frequent runners, but several of the avalanches were in paths that have not run in many years. Continue to expect the unexpected.
Weather: Clear skies, light winds in valley bottom, and mild temperatures. No snow transport observed
Snowpack: We observed a mostly quiet snowpack. Two small collapses, one that produced localized cracks. Lower down in the valley, the snowpack remains mostly faceted, without well-developed slabs. In these areas, if a storm delivers a rapid load of new snow wide spread avalanching like what was seen in mid February could be expected again. For now, it’s just weak, poor structure, with little avalanche concern except where slabs are built in wind-drifted features. Further up in the valley, from around 10,500′ upwards, the mid-pack slabs are much more mature, thicker, and dangerous if triggered. Basal weak layers connect across terrain features. Propagation potential remains high, and potential avalanche size remains large. The upper snowpack is a mix of very stiff wind board and wind slab, as well as numerous melt freeze crusts, with thin layers of facets laminated in between. The upper snowpack slabs are generally stiff. The weak layers are fairly discontinuous. Together that adds to a picture where triggering has grown stubborn in this area; that said, the consequences remain scary. We chose to travel under some paths that avalanche recently and had not refilled, and chose to alter our route to avoid some paths that had not yet run. 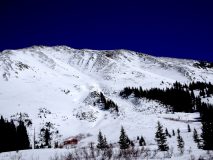 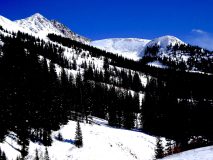 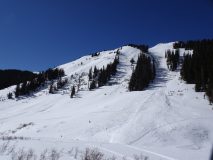 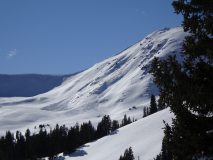