Avalanches: We skier triggered numerous soft slabs breaking on the storm interface near treeline, 10″ to 18″ thick, D1 to D1.5 in size, although one was in long, consequential terrain and entrained enough snow to be a D2. See photos. These broke in both wind affected and relatively wind-free areas. The latter slabs were somewhat surprising because the slab was so incohesive and didn’t produce signs of instability or results in column tests. Just enough of a very soft slab over fragile facets to propagate about 100 feet wide.
Weather: Overcast skies and S2. At ridgeline near treeline, Strong SW gusts with intense snow transport at times, with lulls of light winds between. Minimal transport or wind affect below treeline.
Snowpack: Below treeline: 6″ of low density snow over 1-2cm melt-freeze crusts over facets on southerlies and over near surface facets on northerlies. Shallow sluffing on steep terrain, no slab formation yet or signs of instability.

Near treeline: 12″ of low density snow in wind-sheltered areas; drifts up to 18″ thick, either on firm wind board or near surface facets on northerlies and meltfreeze crust over facets on southerlies. Moderate cracking in wind-loaded areas. No instabilities observed on a steep southerly aspect. Touchy storm instabilities on northerly slopes breaking on the storm interface. 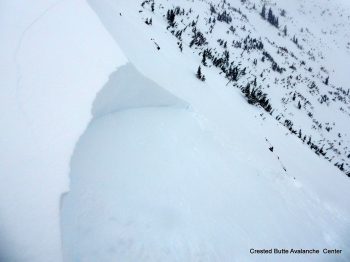 NE aspect NTL. Wind slab near a cornice, quickly tapered in depth below the ridge. Ran on firm wind packed rounds (aka wind board). 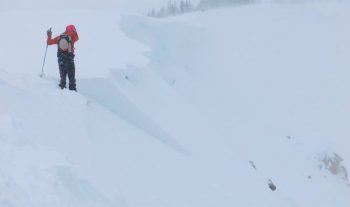 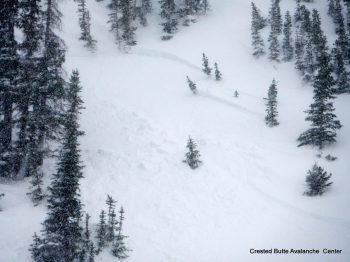 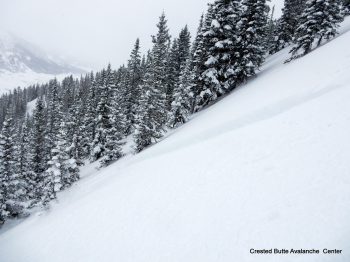 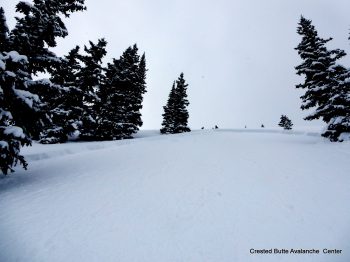 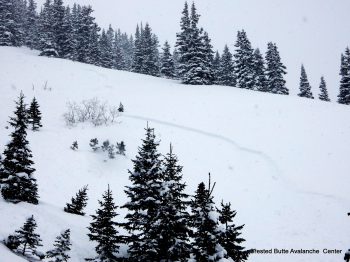 Same slide, pulled out more slab as it ran down. SS-AS-R2-D2-I