Weather: S-1 to S2 most of the day, some partial midday clearing but no vis into the alpine. calm conditions. Temps 5-17ºF

Snowpack: Simple structure, new snow on top of really weak old snow. same same as other parts of zone. appeared the yesterdays snowfall was slightly denser than todays and slightly denser than the old snow it fell on, creating just barely enough cohesion and hardness difference to allow propagation. Seemed the slab had increased reactivity in the afternoon with increased temperatures and a little more time to consolidate than earlier in the morning. Didnt seem like as much an increase of load (though some was occuring) as evolution of the slab character. 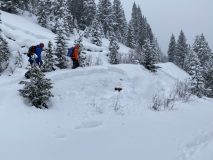