Avalanches: Spotted a recent avalanche on the sunny side of Teocalli in the early morning. Photo is a bit blurry but through binoculars, it appeared as though the crown was drifted over a bit. Likely failed sometime on 2/25. It also released a  slab in the apron out of view on SE aspect which looks to have failed in old snow as well. 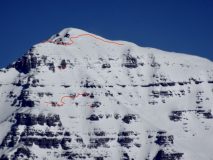